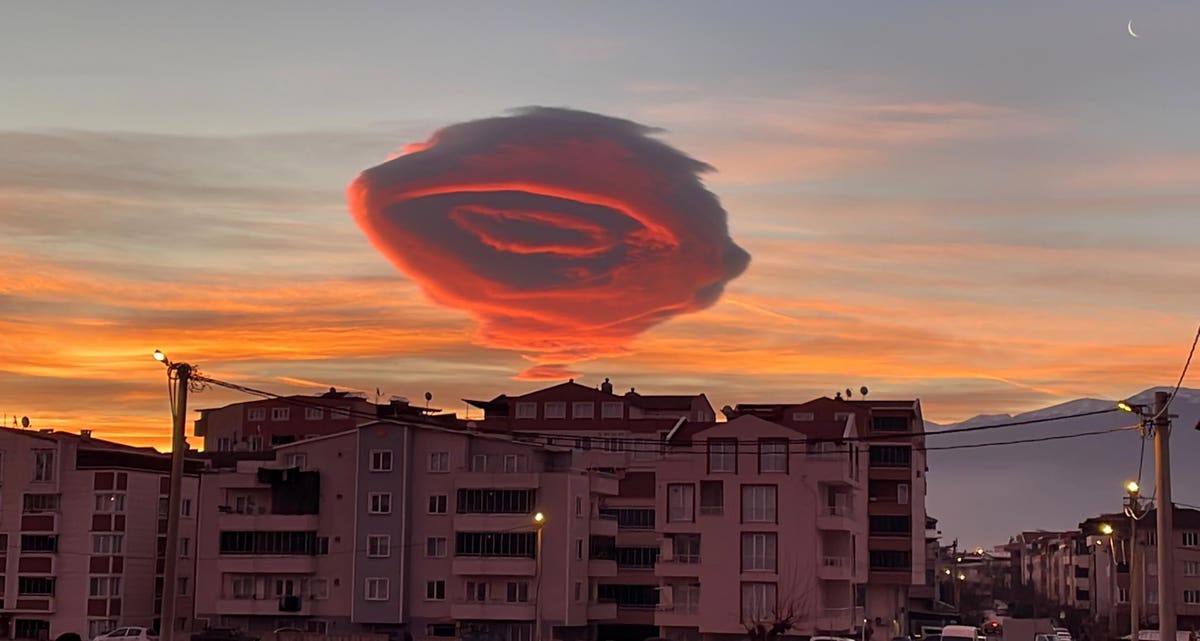 There are a lot of hoaxes or fake weather images on social media, but the viral images of a pink cloud in Turkey are legit. On January 19, 2023, a strange cloud appeared over Bursa province. Here is an explanation of the cloud and its beautiful color.

I was unaware of the viral images until a college friend tagged me on Twitter demanding an explanation. When I saw the photo, it was clearly an example of a lenticular cloud. In May 2023, I actually wrote a piece in Forbes about five weather things often called UFOs, and lenticular clouds were among them. According to a NASA website, the shape when, “Strong winds blow over complex terrain, causing water vapor in the air mass to alternately compress, decompress, and condense into shapes that roughly reflect the land below.”

The technical term for lenticular cloud is lenticular, which, according to the glossary of the American Meteorological Society (AMS), is “a kind of cloud whose elements have the shape of more or less isolated lenses or almonds, generally smooth; the contours are sharp and sometimes show iridescence. Ok, Dr. Shepherd, what is iridescence? This is the color displayed by iridescent clouds. The AMS Glossary goes on to say: “Iridescence results from a phenomenon of optical diffraction, generally of several orders. Cloud droplets or ice particles actually cause light to spread or bend when passing through a narrow part or crossing one of the edges. In some types of clouds (pileus, lenticulars and some types of cirrus) brilliant colors can be seen.

The viral images of Turkey were taken at or near sunrise, which probably also explains the color scheme. At sunrise or sunset, the sun is lower on the horizon. Light passes through more of the atmosphere, causing shorter wavelengths like blue and violet to scatter. This allows the longer wavelength colors of visible light (yellow, orange, and red) to be more apparent. If the air is dusty or polluted, the orange-red colors can be even more vibrant.

Don’t be discouraged. There are often really cool things to see.